The Windy peeks of Ramakkalmedu close to us

It was an afternoon during the Monsoon month of June that me and Josin plan to head to Ramakkalmedu, a quaint hamlet in the Western Ghats of Kerala. Ramakkalmedu is just another seventeen Kilometers from our place, Beaumont Plantation Retreat. Just before we reached Ramakkkalmedu, we could see the tall windmills atop the mountains adjacent to Ramakkalmedu. We availed a five rupee ticket just before we headed to the giant statue of Kuruvan and Kuruthi along with their son. Kuruvan and Kuruthi were the aborigines of Idukki district. As we reached top close to the statue of Kuruvan and Kuruthi, we could have panoramic views of the valley of Tamil Nadu until the horizon. The constant, steady winds are at time breezy and chilling because of the periodical light drizzles. We could see many windmills installed in the plains of Tamil Nadu.

Just across the mountain where the statue is located is Ramakkalmedu, a mountain with unstructured rocks above. In a few minutes, we decided to trek Ramakkalmedu, and we started for it. It was a combination of steep hikes and mountaineering, and we had few others climbing along with us. As we progressed, we were about to witness something close to what we call a fantastic view point. It is a mythological belief that during “Threthayuga” Lord Rama reached this peek area with Lakshmana searching beloved Sita and wailed “Where are you Sita….Sita…”

We climbed to the top of the mountain where we saw the large plains and farm fields of Tamil Nadu until the Horizon. The viability was low due to the drizzles; however, we had a few beautiful moments of sunshine. We could evidently see the end of the Western Ghats and the beginning of the plains which makes it a beautiful view point. It took us an hour to climb the whole mountain with numerous gaps. We took photographs to show it to the whole world and here they are…

Walking downhill was easier and faster. We were tired and had a pretty nice break there; tea at the local shop was good enough to get us refreshed. We headed back to Beaumont Plantation Retreat, that was when we had this idea of cycling to Ramakkalmedu next time..hope you will wait for the rest until we get this idea into realty. 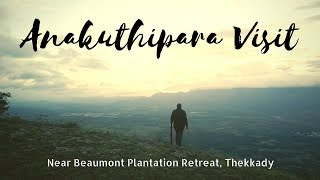